No, the title in German isn’t my doing. It belongs to an editorial by ’s “Die Welt” newspaper and no doubt needs NO translation whatsoever. It comes the day after one of our “Great Leader’s” (aka Silvio Berlusconi) many faux pas at the recent G-20 and NATO summits in and France/Germany respectively.

In the former case, good’ol Silvio was overheard yelling “Mr. Obamaaaaa” twice during the photo opportunity with other G-20 leaders at Buckingham Palace and in the presence of none other than Queen EII (she apparently turned around after the picture was taken and asked somewhat annoyed, “But who’s yelling”?, looking towards the back of the photo line-up from where the yelling was coming from). The other faux pas from the Clown himself was during the G-20 photo shot where he practically grabbed both Obama and Russia’s Medvedev and hugged them both while smiling away in the middle of the two. Again, the Clown was at his best (seeing that when Obama won the elections, Berlusconi had referred to him as someone who is “tanned”, I’m just wondering what Obama’s reaction was when he had to be part of Silvio’s photo opportunity!).

The icing on the cake though came at the NATO summit. As Germany’s Angela Merkel was waiting for the arrival of the other NATO leaders (27 if I’m not mistaken, not including the Clown) in order to commemorate the many fallen NATO soldiers in Afghanistan with one minute of silence, Berlusconi was seen arriving in his official car while talking on his cell phone. As he got out of his car, and seeing Merkel off in the distance, he waved to her as though to say (while talking on the phone with Turkey’s prime minister Erdogan), “Yeah ok, I’m coming, just give me a sec ok”? (the purpose of his call was to convince Erdogan to accept ’s Rasmussen as NATO’s new sec-general). No doubt from Merkel’s expression on her face she probably muttered to herself: “Ok, so what’s this coy and sleazy Italian up to this time”? He continued to talk away merrily on the phone by the river bank as other leaders began lining up, including Obama and NATO’s Dutch sec-general (I would also imagine that ’s Harper was punctual and already there with the other NATO leaders as has lost a rather high number of soldiers in ). But not good’ol Silvio as he was still chatting away on the phone with his Turkish buddy, and missed the solemn occasion.

Evidently and luckily, not all agree with Silvio’s constant shenanigans at the international level (magnificent was his gesture a few months ago as he hosted his other buddy, Vlad Putin, on the isle of . As many know, has witnessed several “mysterious” murders of its journalists. At one point, a Russian female journalist posed a rather provocative question to Mr. Putin. Listening through the interpreter, and evidently siding with his chum Vladimir, Berlusconi imitated a machine gun-like gesture in the direction of the poor journalist (perhaps an A-47 Kalishnikov in Putin’s honor?), as though to say: “Watch out otherwise you’ll end up just like your fellow journalists”! It would seem, from the observation of other journalists who were present at the press conference, that the young Russian journalist had sh.. her pants as a result of Silvio’s fine and “humane” gesture!). The reaction to his recent escapades comes from La Repubblica newspaper (). It shows President Obama in the courtyard of ’s splendid castle courtyard addressing a very large crowd. The photographer managed to capture the essence of that moment: it shows Obama in the foreground speaking to Czech citizens and tourists. In the background a banner is raised amongst the crowd (apparently the only one which is visible). It reads the following: “Obama sorry 4 Berlusconi”! It was written by two Italian 24 year-old students on an Erasmus exchange program in . 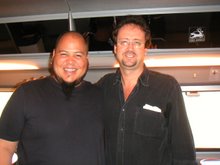 Me (on the right) with Abe Laboriel Jr., Paul McCartney's drummer!